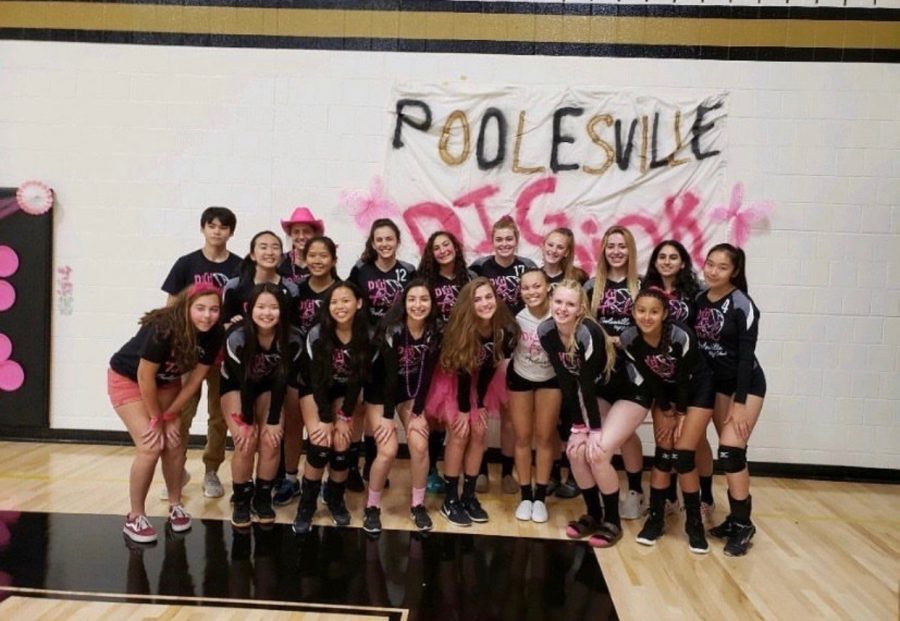 On Oct. 3rd, Poolesville High School’s girls volleyball team participated in the event that has quickly become a nationwide tradition among volleyball teams; Dig Pink. The annual Dig Pink game is more than just a regular volleyball game for the players. It’s an event in which the team and school community rally around a common goal. The game is an avenue for the team to raise money for the Side Out Foundation, a charity dedicated to improving the lives of those with stage IV breast cancer.

The team played Damascus High School and unfortunately couldn’t manage to win. However, they fought extremely hard, keeping each set within five points. Despite the loss on the court, the team pulled off a win through their fundraiser, raising over $1600 from the fundraising website alone.

The players, parents and coaches worked hard to make the game a success. In an interview with senior volleyball player Megan Nee, she discussed how they promoted the game through Falcon Media and handed out flyers at other sporting events in Poolesville.  After school on the day of the game, the players decked the gym out in pink. The team also received special Dig Pink jerseys for the game which have accents of pink. Family members of the team could donate online for weeks before the game, while fundraising was done at other sporting events and at volleyball games. More money is raised for the cause through a bake sale and silent auction held at the Dig Pink game. As of Oct. 24th, the team has raised over $1,300, besting last years efforts by $250, and they aren’t done. They also raised money at an event at Markoff’s Haunted Forest at the end of October.

Before the game, senior Kendall Griffith and freshman Saragha Surendra gave a speech where they talked about the fight against breast cancer, and all they have done to help support victims and survivors.  They also announced the names of survivors in attendance, including Surendra’s own mom, and gave them flowers.

Nee said, “[I enjoy it] because a lot of people come out to the game and we get to raise money for a good foundation.”

The Side Out Foundation was started by Rick Dunetz, a volleyball coach whose wife had breast cancer. The foundation focuses on helping those with stage IV breast cancer, the same type Dunetz’s wife had. The money raised goes into extending the lives of those with breast cancer. The money also goes into clinical trials for it, as even though this stage causes the most deaths from cancer, it is also the least researched. The foundation also awards college scholarships to “side out ambassadors”, players who raise funds through the campaign while learning lessons about community, perseverance, and health.

Across the county volleyball teams participate in the Side Out initiative. In fact, Damascus High School has been involved in the game every year since the foundation began in 2008. Poolesville joined in on the game in 2009. Even the volleyball team at Montgomery College participates. All of the teams decorate their gym with pink, hold silent auctions, and design special Dig Pink jerseys for the game.