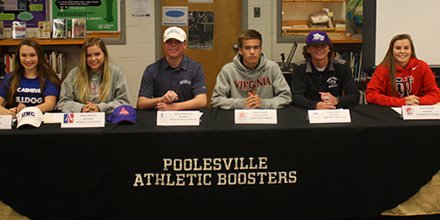 On Nov. 8th, six PHS seniors officially signed their national letters of intent, indicating their commitment to participate in the National Collegiate Athletic Association program as they head into college.
Seniors Alice Walker, playing soccer at the University of North Carolina, Haley Harkins, playing lacrosse at American University and Ryan Lockett, running cross country and track and field at the University of Virginia, all signed for Division I.
Seniors Ryan Haddaway, playing baseball at Mount St. Mary’s University, Brady Pearre, playing baseball at High Point University, and Hannah Bush, playing lacrosse at University of Tampa, all signed for Division II.
“University of Tampa has been my dream school because of the great nursing program at the school. It’s just minutes from the beach, it’s always hot, and I have the opportunity to play lacrosse,” stated Bush. She has been playing for eight years, setting her sights on lacrosse at a collegiate level in seventh grade.
The students were joined in support by their family and friends as Principal Ms. Deena Levine and administrator Mr. Don Reed said a few words to open the ceremony, which lasted around twenty minutes. Athletic Director Mr. Ed Ross and Ms. Regina Grubb were also present to support their athletes.
“My goals now for the next four years are to set new records in the Sunshine State Conference in lacrosse and graduate from Tampa with bachelor of science in nursing. Be patient with the process and never give up your dreams. If you rush it you may not make the right decision,” concludes Bush.
Lockett is a two time cross country state championship winner. “It’s really a dream come true,” stated Lockett.
“Get the best grades you can get and work hard all the time,” says Haddaway, who decided to pursue baseball at Mount Saint Mary’s after discovering how much it felt like “home.”