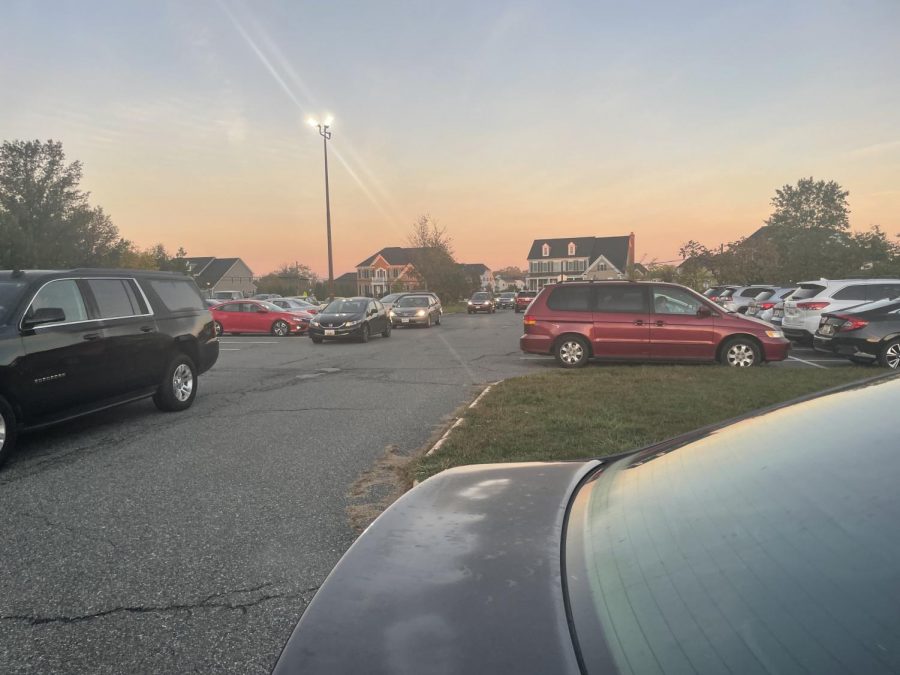 Backed-up student drop-off line in the student parking lot at 7:30 AM.

*Opinions expressed in this article represent the views of the editorial board and not necessarily those of the school population or administration.

As students rolled in for the first day of school on 30 Aug. 2021, students and parents alike noticed a major problem with drop-off: the line was too long. In recent weeks, the problem has yet to be solved and seems to only be getting worse.

On any given weekday, if one were to get to the “Welcome to Poolesville” sign at approximately 7:27 AM, it takes about 15 minutes before they would enter the parking lot, despite it normally taking a mere six minutes. This delay has managed to make a large number of students late to their first period every day. One possible culprit for the large delays is the increased number of car-riders due to COVID.

“The drop-off line is considerably longer this year than in past years,” senior and student driver, Nicole Kim, said.

This surge in car-riders has accounted for greater delays and congestion. Not only that, but the traffic delays are furthered by the landscape and infrastructure around Poolesville High School (PHS). Delays are unevenly spread across West Willard Road, with the majority of delays coming from the Northeast.

“The parking lot, like the school, was constructed for a lot less students,” PHS Security Director James “Chip” Etheridge said.

Poolesville, one of the oldest schools in the Montgomery County Public School system, has always had concerns about usability and accommodations. (Interview with Mr.Etheridge) The small parking lots and roads have only furthered delays and have limited possible workarounds. Concern has also not only been limited to academics as the parking lot situation has caused some stress among students.

“I think the drop-off line has had a negative effect on me mentally because it starts my day off with the wrong attitude.” Says Kim. (Interview with Nicole Kim)

With the stress of school and all else going on, the parking lot issue should not be a concern for students.

These concerns have not been highly voiced, but they are visible, and security has attempted to find a solution. In the past couple of weeks, the security team has been trying to split the drop-off lane into two separate lanes.

“[It is to] get as many vehicles on our property as possible,” says Etheridge.

The main concept behind getting as many cars onto PHS property is to try and limit back-ups on West Willard road. However, even triaging the cars into two separate lanes has not been very effective as delays and back-ups persist.

The problem is not only isolated to Poolesville. Almost every High School in the Montgomery County Public School (MCPS) system has significant and major delays entering and exiting the school. Even MCPS themselves have acknowledged the problem and sent transportation managers to schools to assess and monitor traffic. However, MCPS has yet to find a single plausible solution to the widespread delays across all schools.

The main problem with traffic congestion is the high volume of cars trying to enter one area at a specific time. One possible solution could be creating a separate drop-off loop separate from the student parking lot, similar to how the bus loop is separated. While putting the drop-off line into the bus loop would be a terrible idea, creating another external loop with a separate entrance and exit would alleviate congestion and take pressure off the one entrance and exit point on the parking lot and Willard Road. Moving the drop-off line to just outside the cafeteria would minimize delays on both Willard Road and the student parking lot. It also has a separate entrance and exit point and an extended lane reaching to the back of the cafeteria, allowing for maximum opportunities for parents to let students out of vehicles.

Overall, by moving the drop-off lane to the long section of road just outside of the cafeteria, we could reduce traffic and delays outside of the student parking lot on Willard Road, while also having minimal consequences with a couple of adjustments.