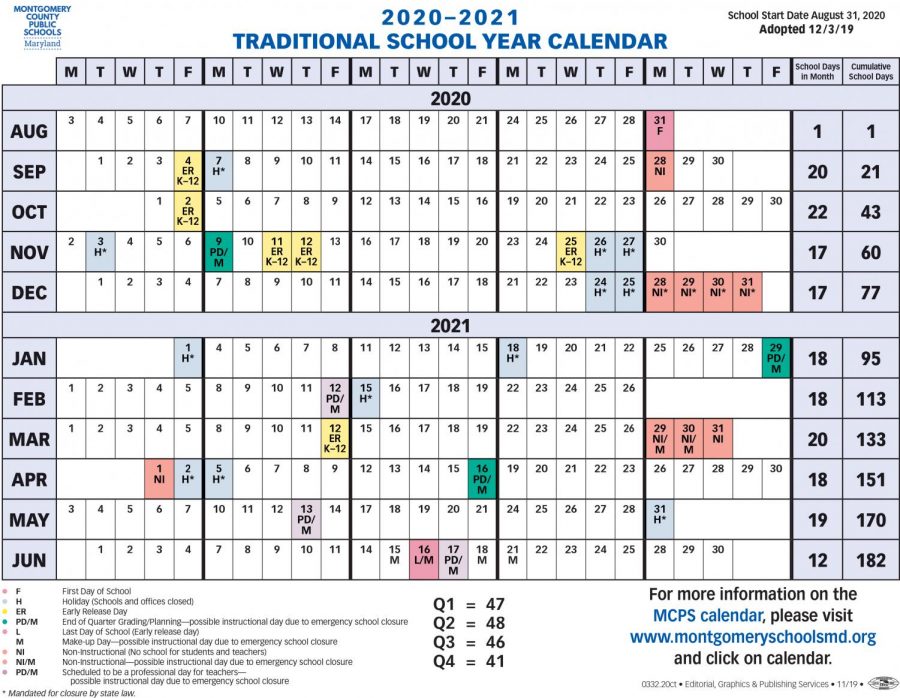 On Dec. 3, 2019 at the MCPS Board of Education Meeting, the Board adopted the new school year calendar for the 2020-2021 school year. In this calendar, the school year starts on August 31, making it the first time since 2016 that MCPS has opened their doors before Labor Day. The school year ends June 16, giving students 182 instructional days, a 10-day spring break, one professional day at the end of each marking period, and two additional professional days in the second semester. The calendar also has one operational closure, or a day that teachers and students have off while offices remain open, in September.

Because Martin Luther King Jr. day falls on Monday, January 18, and Inauguration Day falls on Wednesday, January 20 in 2021, the school board had to change the policy that requires schools to be closed on Inauguration Day, in December of 2019. The board believes that having the Monday and Wednesday off could potentially affect attendance on Tuesday because of the “awkward” schedule.

Though the earlier start may appear to be an inconvenience for summer plans, students do not seem to have large issues with the earlier start date. According to Indira Fayson, a working junior in Global Ecology, “I don’t think [the new schedule] will affect my summer that much… it is kind of hard to plan vacations in August so I would just have to make sure I make my vacation plans in June and July.”

Teachers also appear to be mostly unaffected by the four-day change. According to science teacher Mrs. Mary Adah, “I like this coming year’s calendar better than this current year. I don’t like when we just have a half day for report cards or end of the semester… It’s very difficult to try to get everything done on a half day because you’re exhausted after teaching… I’d rather have a full day off the next day instead.”

In 2016, Governor Hogan made the executive decision that Maryland Schools must start after Labor Day, however, as of earlier this year the House of Delegates have overridden Hogan’s order in a 93-43 vote. The Maryland Grand Assembly then passed a bill in March of 2019 that allows each county to choose their own school start and end dates, which MCPS is now taking advantage of.

The school year calendar was one of three potential calendars that board members could vote on. The first one started after Labor Day on September 8 and ending June 24, the second one started on September 1, and the third and official calendar started on August 31 and ending June 16. Along with Montgomery county, Eastern Shore and Queen Anne’s County are starting school on August 31.