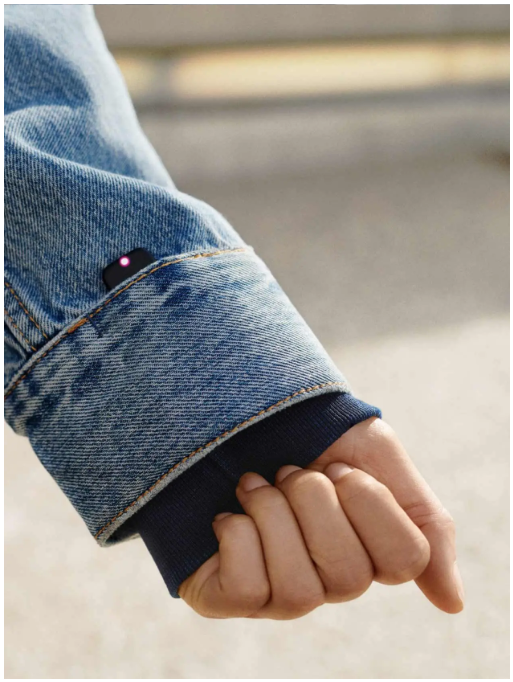 The smart jacket produced by Google and Jacquard. Image courtesy of Jacquard.

On Oct. 3rd, Jacquard by Google and Levi’s launched a new, improved collection of smart jackets, which are capable of connecting to the user’s phone. The collection includes the $198 Trucker Jacket and $248 Sherpa Trucker Jacket.

The Trucker Jacket has an interactive cuff and receives notifications through the Jacquard Tag located in the left sleeve cuff. Users of the jacket can ask Google Assistant about news and weather, get alerts if they forget their phone or jacket, trigger photos, control the music they are listening to, connect to calls and texts, and get navigation help and rideshare information. The jacket is 100% cotton and has a pointed collar, front-button placket, two button-flap patch pockets on the chest, and welt side pockets.

The original collection of smart jackets from Google and Levis was first released in late 2017. A Jacquard Tag connects the article of clothing to digital services and information through the use of Bluetooth and the Jacquard App. However, this tag is not waterproof and must be removed before washing the clothing. The clothing is woven with Jacquard Threads, which are thin strands of conductive metal alloy which can be combined with natural and synthetic fibers to create yarn, allowing the clothing to react to specific gestures, such as swipes.

When addressing the usefulness of the jacket, SMCS Senior Amol Agrawal states, “In like the general world, it can be useful. You know, you can take a call or whatever, you could get notifications.” But, he also claims that the technology is not revolutionary. “It’s just kind of like an extension of what we already have. It’s basically a phone or a smartwatch built into a jacket or coat.” admits Agrawal.

Wearing a smart jacket would make it easier to use technology more often, raising red flags for those who believe that using technology excessively could have negative impacts on society. “There is so much research that I’ve read that it [too much technology usage] is detrimental in a lot of ways,” claims English teacher Melissa Adams, who is concerned about student health. She goes on to explain that increased technology usage can negatively impact the brain. “It inhibits the part of the brain that can develop empathy, so students are less able to empathize with each other. That’s why we have really horrible internet comment sections: because people don’t empathize with the people that they’re going with. It decreases the ability to sleep. The more that you’re using your phone before you go to bed, the less restful sleep you are going to have, which that has all kinds of terrible health problems,” describes Adams.  She adds that inhibited ability to focus and increased cyberbullying, among other effects, can also occur.

In addition to partnering with Levi’s, Jacquard by Google has partnered with Saint Laurent to create a $995 Cit-E Backpack with an interactive strap.